- WE GOT THIS COVERED

"THE ABSOLUTE BEST OF CONTEMPORARY CINEMA."

"THE MOST ACUTELY OBSERVED COMEDY OF THE YEAR, IF NOT IN SEVERAL YEARS. A breathless black diamond course of social stress and embarrassment."

"POTENT. UNLIKE ANY FILM I’VE SEEN."

"FORCE MAJEURE IS A JOLT. YOU WON’T KNOW WHAT HIT YOU. Director Ostlund shifts gears from humor to psychological thriller with cunning skill."

"A sharply funny satire about the distance between what men project and what they really are."

"A MOVIE THAT WILL CHANGE HOW YOU THINK ABOUT MANHOOD."

"A hilarious takedown of masculinity."

"Östlund masterfully manages the marital tensions that drive the film's plot forward while imbuing the scenario with these carefully layered philosophical reflections."

- We Got This Covered

"One of the funniest films of the year."

"It's awkward, it's biting, it's uncomfortable, and Force Majeure is undoubtedly one of the most enjoyable films of the year."

"Force Majeure represents what is perhaps Östlund's most sophisticated thought experiment yet, at once provocative and wise. It is a penetrating study of that most ludicrous of social pretenses — masculinity, toxic and ubiquitous."

"Östlund shifts gears from humor to psychological thriller with cunning skill, redefining courage and family in the process. Force Majeure is a jolt. You won’t know what hit you."

"A brilliant dissection of gender and family."

"The most acutely observed comedy of the year."

"Grade A -. It's the rare kind of moviegoing experience that will haunt you long after you leave the theater."

"The cinematography is thrilling, the actors are marvelous and director Mr. Östlund shifts masterfully between violent confrontational outbursts of anger and moments of quiet, introspective feelings without words."

"This brilliant, viciously amusing takedown of bourgeois complacency, gender stereotypes and assumptions and the illusion of security rubs your face in human frailty as relentlessly as any Michael Haneke movie."

"Force Majeure is full of hilariously observed, brutally honest comedic moments that expertly call out the awkwardness and pettiness that are inherent in all long-term relationships."

- The New York Review of Books

- The New York Review of Books

"Easily one of the most impressive European dramas of late."

"Assured and finely calibrated on every level, with especially expert, nuanced performances by its leads."

"The art-house answer to Gone Girl."

"Like an episode of “Curb Your Enthusiasm” shot through with Scandinavian austerity — or “Scenes From a Marriage” on skis — this witty, thoughtful, spectacularly conceived movie delivers on the promises made by the far more glib and superficial ‘Gone Girl.’"

"The movie to see and talk about if you want to experience the absolute best of contemporary cinema."

"POTENT. UNLIKE ANY FILM I’VE SEEN. A film that makes your murmur in amazement as you watch."

"AUDIENCES WILL FIND IT IMPOSSIBLE TO RESIST THE MOVIE AND THE TICKLISH POINTS IT PURSUES."

"WICKEDLY FUNNY. A FORCE TO BE RECKONED WITH."

"A BEAUTIFULLY MADE, BRILLIANTLY DARK COMEDY."

"ONE OF THE CINEMA'S MORE REVEALING PORTRAITS OF MANHOOD AND MARRIAGE."

"It stands to complicate many a romantic arthouse date"

This wickedly funny and precisely observed psychodrama tells the story of a model Swedish family—handsome businessman Tomas, his willowy wife Ebba and their two blond children—on a skiing holiday in the French Alps. The sun is shining and the slopes are spectacular but during a lunch at a mountainside restaurant, an avalanche suddenly bears down on the happy diners. With people fleeing in all directions and his wife and children in a state of panic, Tomas makes a decision that will shake his marriage to its core and leave him struggling to reclaim his role as family patriarch. 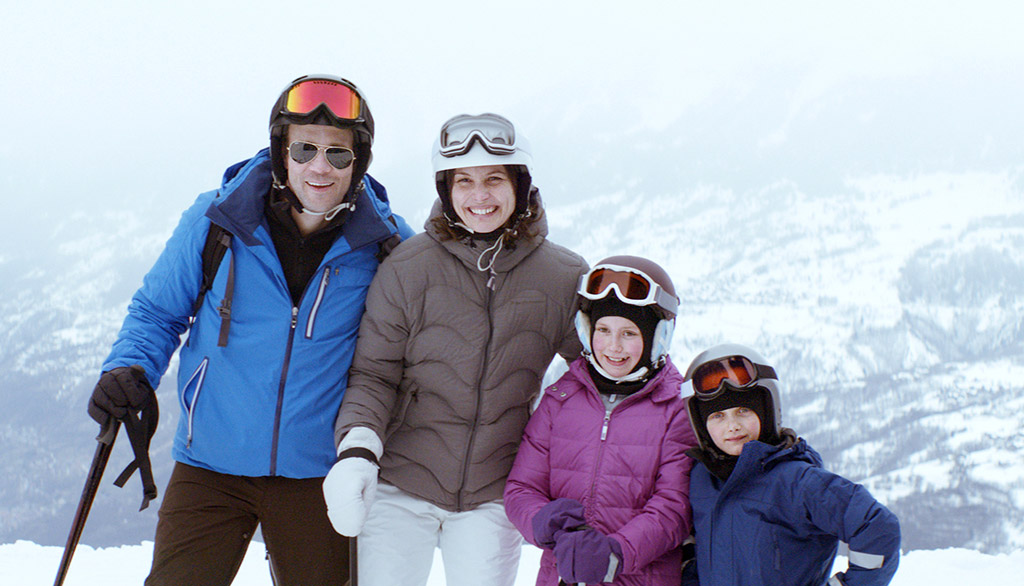 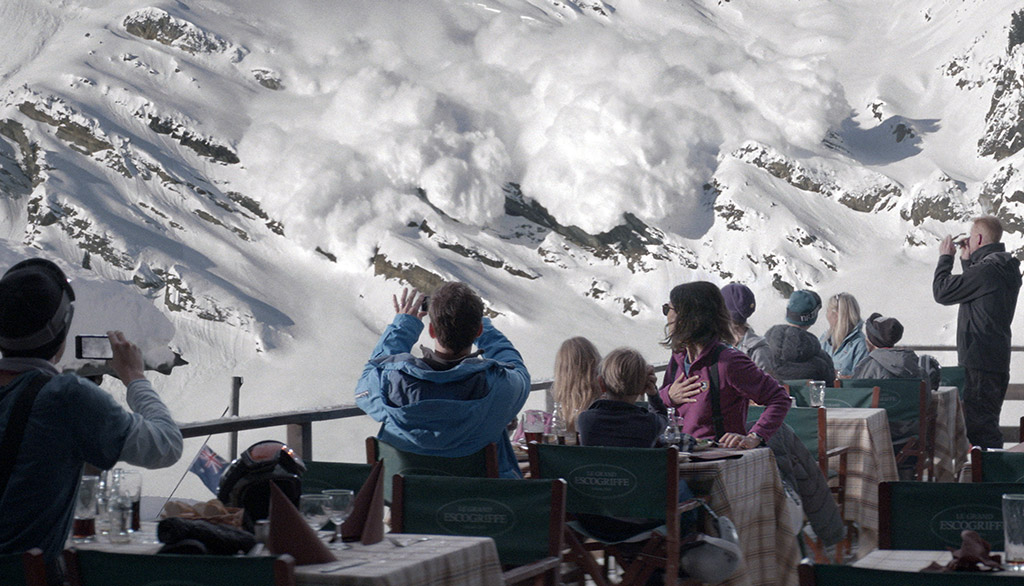 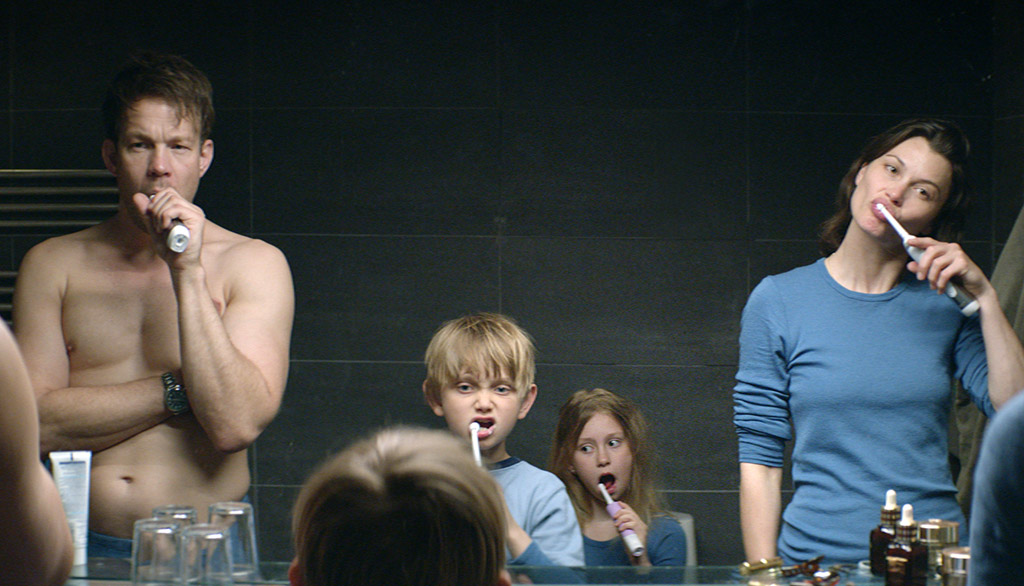 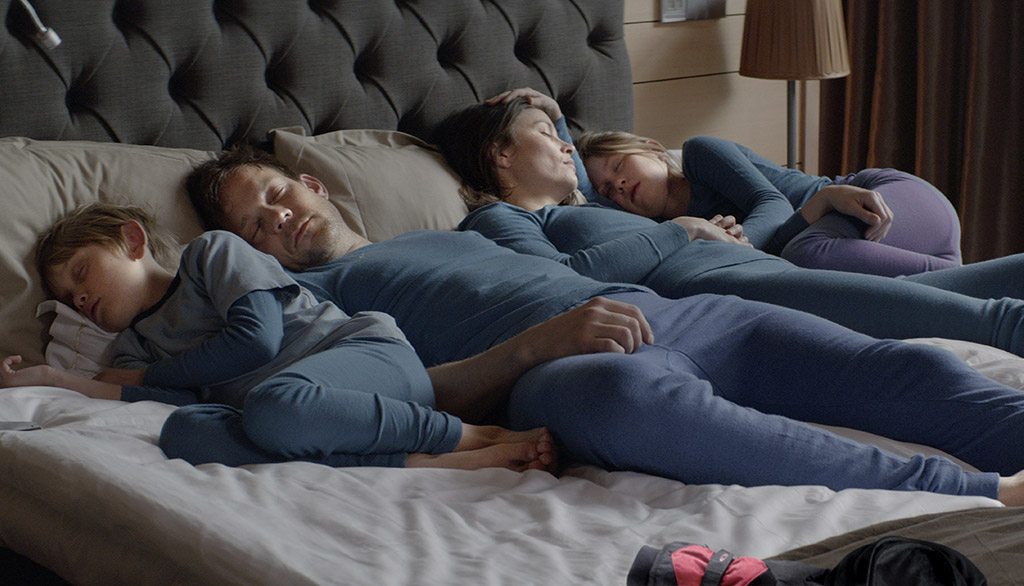 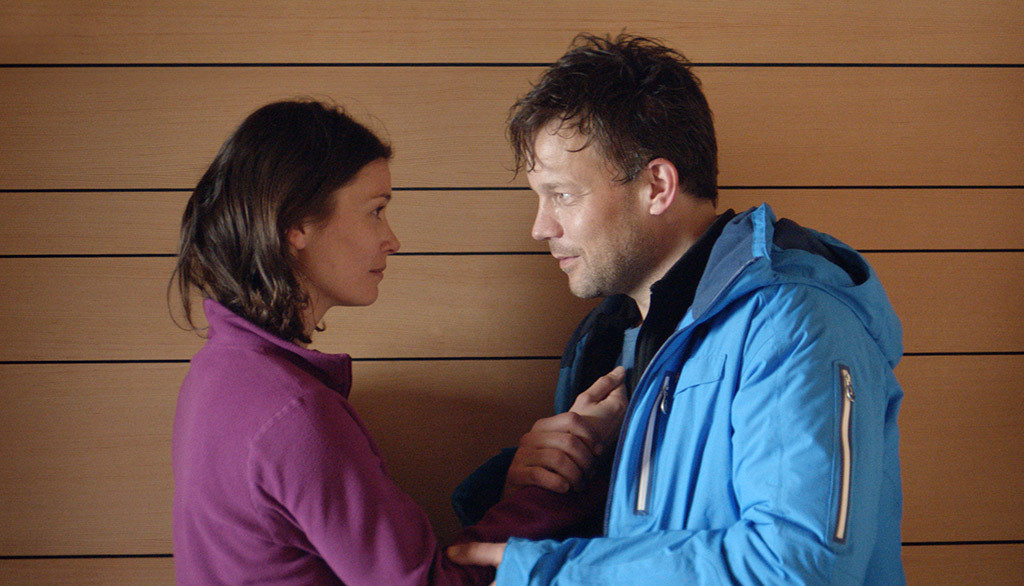 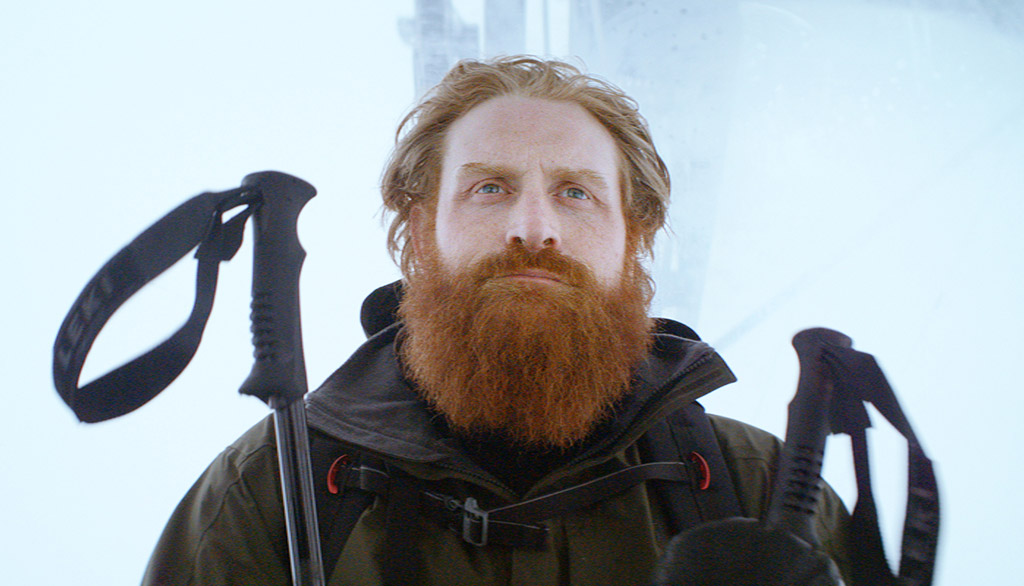 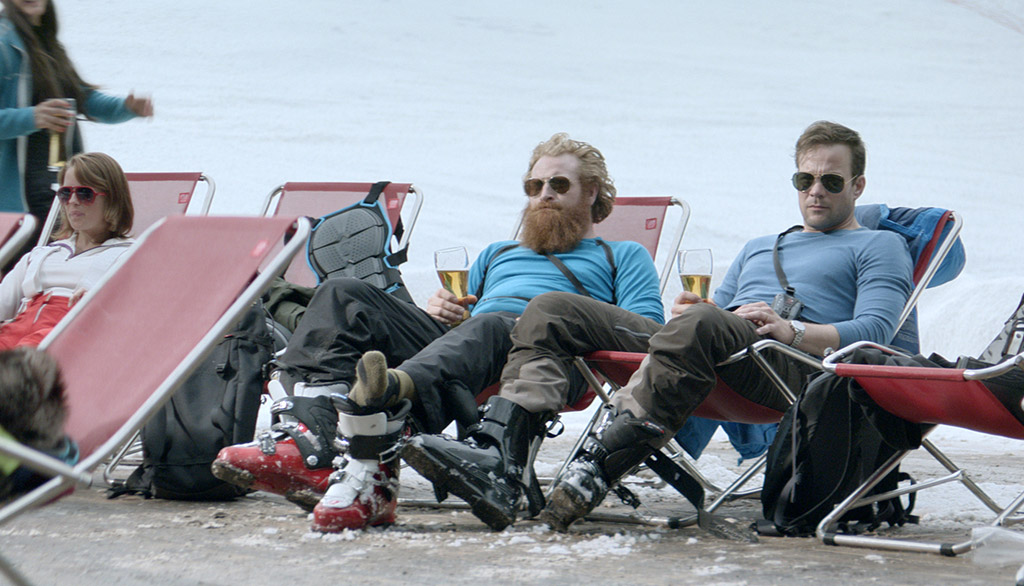 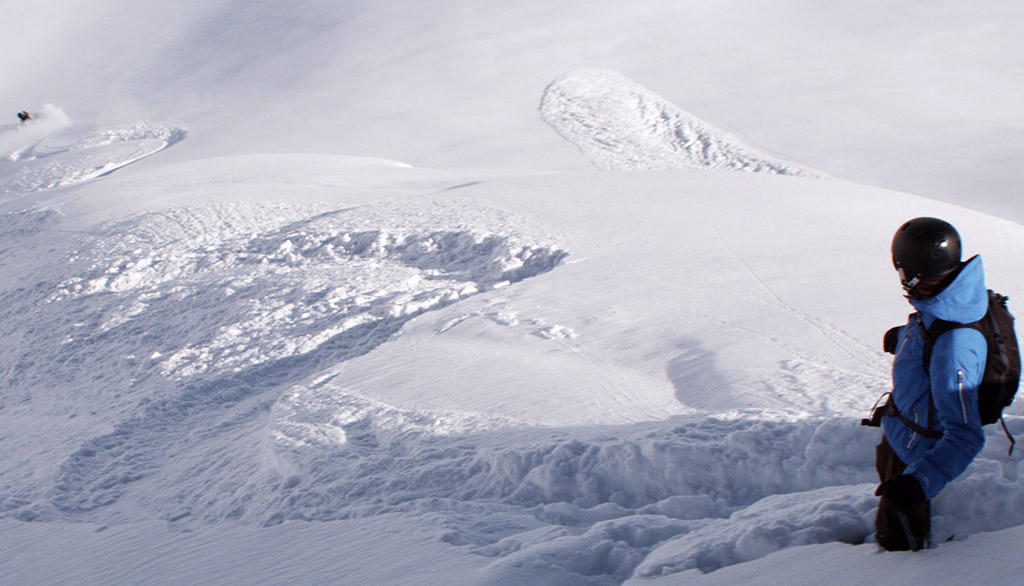 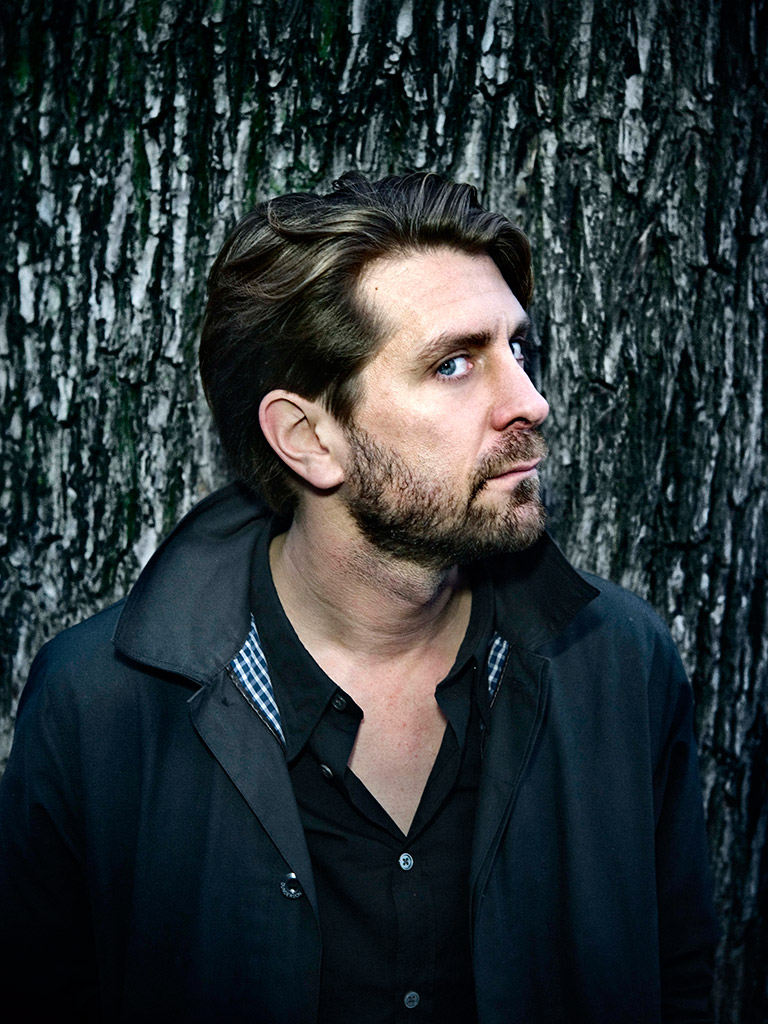 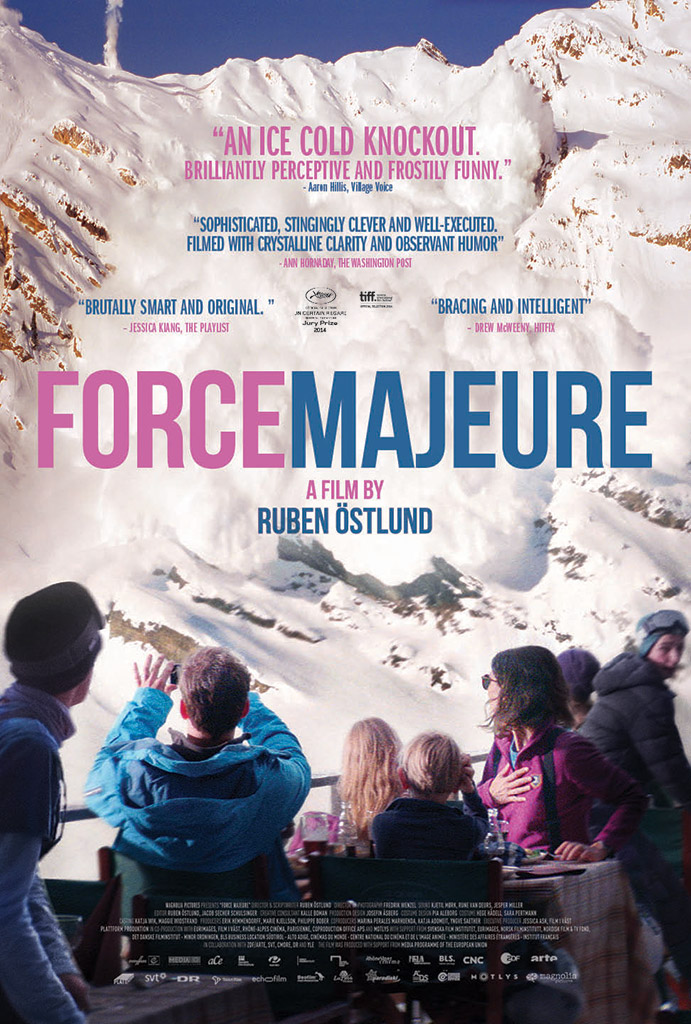 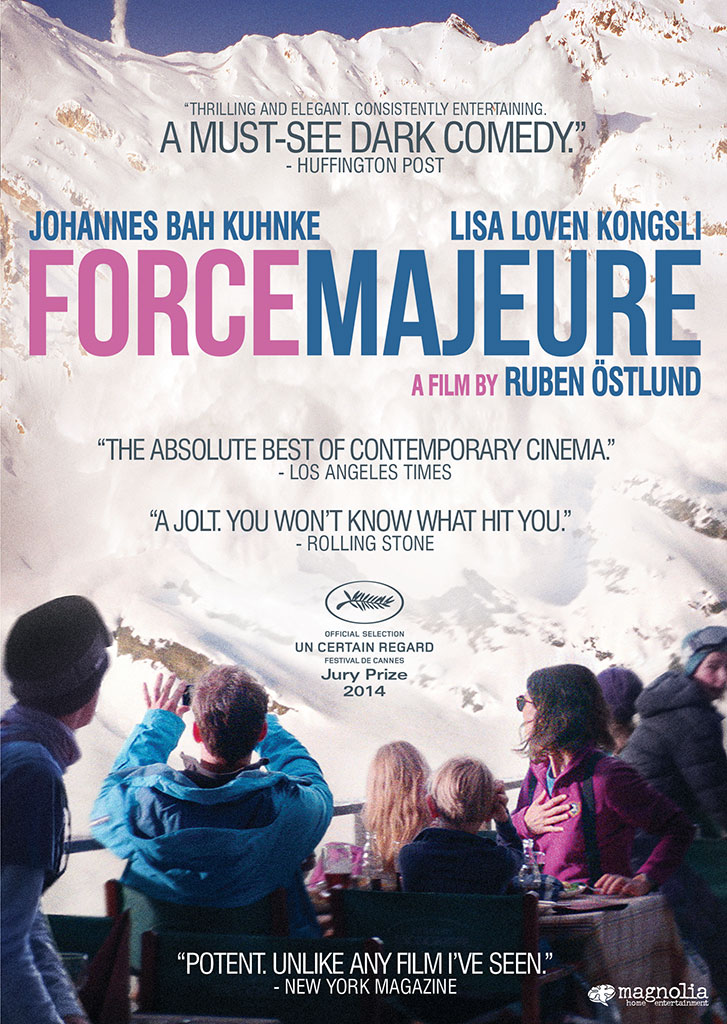 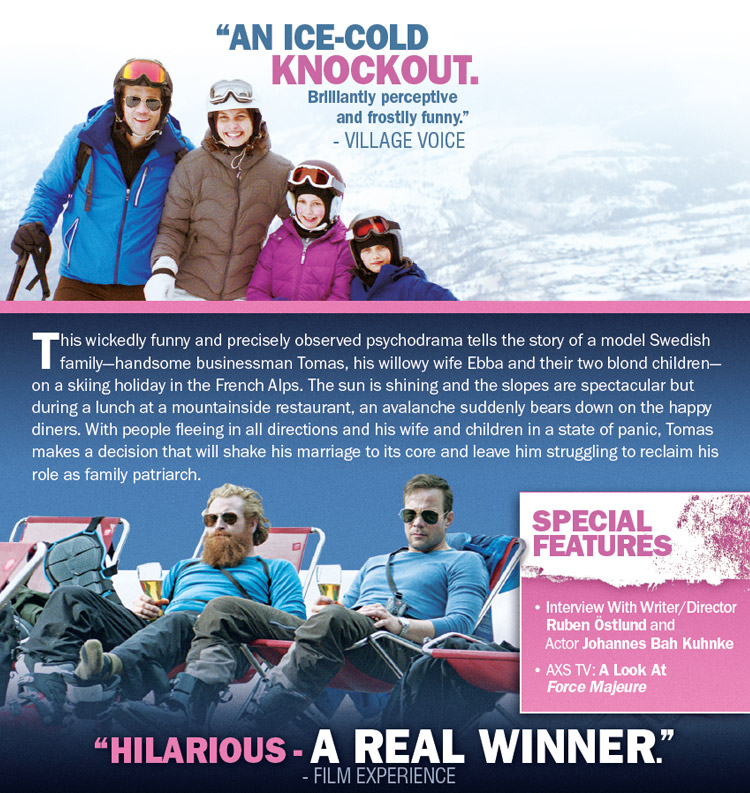