"ONE OF THE SINGLE BEST MOVIES ABOUT PUNK…"

"There is hardly a shortage of movies about rock ’n’ roll, but there are few as perfect — which is to say as ragged, as silly, as touching or as true — as “We Are the Best!,” Lukas Moodysson’s sweet and rambunctious new film."

"A joyous, heart-swelling story of youthful rebellion. A delightful return to form for Lukas Moodysson."

"A JOYOUS TIME CAPSULE. Captures the DIY empowerment of punk rock and the bond of female friendships in one blissful swoop. For those of us who've been hoping that Lukas Moodysson would return to the tender touch of early movies like Show Me Love and Together, the wait is over."

"VIBRANT, HILARIOUS AND POIGNANT. The best film in years from one of the planet’s greatest filmmakers."

"OVERWHELMINGLY COMPASSIONATE. A joyous celebration of youth, friendship and rebellion. There is boundless joy to be found in watching the girls’ thunderously confident first steps towards punk superstardom."

"EXHUBERENT, HEARTFELT AND FUNNY. A touching, honest portrayal of female friendship, with great performances from the lead actresses."

"The director of Together and Lilya 4-ever is back on form. With warmth and affection, it cheerfully celebrates the DIY ethos and the urge to revolt. Affirms that an adolescent girl’s bedroom is as good a place as anywhere to find the ingredients for personal development and political foment."

"Era-specific but never nostalgic, tender but never sentimental, We Are the Best!, like all good films about teenage girls, finely illuminates the emotional extremes of this tumultuous development stage."

"The best film in years."

"A film that captures the unifying power of music as well as anything since Richard Linklater's School Of Rock."

"An exuberant tale of teen rebellion that will appeal to anyone who has ever been a teenager."

"This is a treasure of a film that you can't wait to share with everyone you love."

"A film that's likely to redefine Moodysson as one of the world's most revered indie directors."

"The film’s joy just blows right through you."

"A poignant look at the ups and downs of being a misfit kid."

"Will melt the ice from any cynic’s heart."

"The indie film you need to see this summer."

"Fluidly alternates between the messiness and warmth of female friendship."

"I thought it was adorable. Really embodies the punk spirit of that era, a favorite of the year."

"Lukas Moodysson is one of the best directors of young people."

"One of the best Rock & Roll cult movies in years"

"Hilarious, touching, and thought provoking, this is a joyous celebration of punk music, female friendship, and, most of all, 13-year-old girls."

"Brash and sweet, We Are the Best! captures perfectly the aimlessness of adolescence, the waiting to become something that's so often intertwined with the desire to make something, to leave your mark on the world in some small way."

"Punk-Girl Blast We Are the Best! Earns Its Title."

"It may be temporarily impossible to erase the grin from your face while watching Lukas Moodysson’s We Are the Best, because it very thankfully lives up to its lofty title."

- Under the Radar Magazine

"The group’s anthem “Hate the Sport” is inspired by a stuffy gym teacher, and it’s maybe the catchiest thing you’ll hear this year."

- Under the Radar Magazine

"Gets under your skin, into your heart, and refuses to be forgotten."

No film I’ve seen so far this year has provided the sheer moviegoing pleasure of 'We Are the Best!’"

"The feel good movie of the year."

"A BLISSFULLY FUNNY FILM. Director Moodysson is masterly and there’s a magical sense of life caught on the fly. WHEN MEASURED BY THE PLEASURE IT CONFERS, "WE ARE THE BEST!" IS A BIG DEAL THAT WILL BE WINNING HEARTS—AND EVEN GROWNUP MINDS—FOR A LONG TIME TO COME."

"IF EVER A MOVIE EARNED THE EXCLAMATION POINT IN ITS TITLE, IT’S ‘WE ARE THE BEST!’. It feels practically revolutionary in its joy."

"AN EXHILARATING BLAST OF A MOVIE. TOTALLY IRRESISTIBLE. Director Moodysson sets fire to clichés and the three young stars are radically fierce and funny. PREPARE TO BE WOWED."

"The performances and energy of the film are, from beginning to end, thrilling."

"I want to snuggle with this movie. Hug it. Smile and laugh with it. This is a movie that is deeply refreshing and enjoyable in the way too few films are. It’s not merely entertaining. It’s satisfying."

"'We are the Best!' is a reminder that music can save you and inspire you when nothing else in the world makes sense."

"Will rock your world."

"This raucous, life-affirming winner might be the best time you'll have at the movies all year."

"A breath of fresh air at a time when we get a deafening 3-D blockbuster week after week."

We Are the Best! is a story of three young misfit girls growing up in the early ‘80s Stockholm. Pixieish, mohawk-sporting Klara and her best friend Bobo are 13-year-old rebels looking for a cause. Despite having no instruments—or discernible musical talent—the two put all their energy into forming an all-girl punk band, recruiting their shy, classical guitar-playing schoolmate Hedwig as a third wheel. With tender affection for its young characters, We Are the Best! paints a joyous and sharply observant portrait of the rebellious spirit of youth and growing up different. 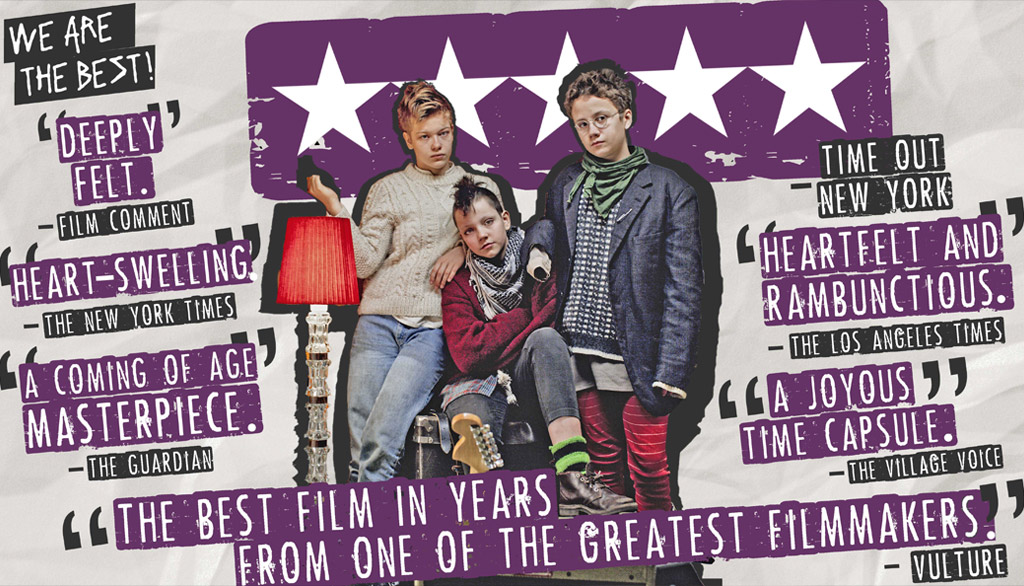 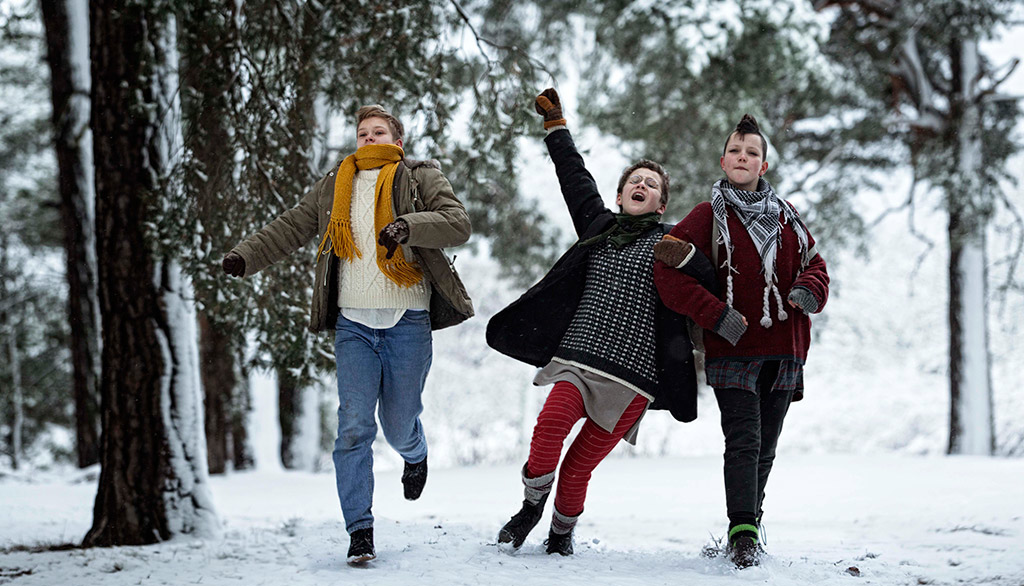 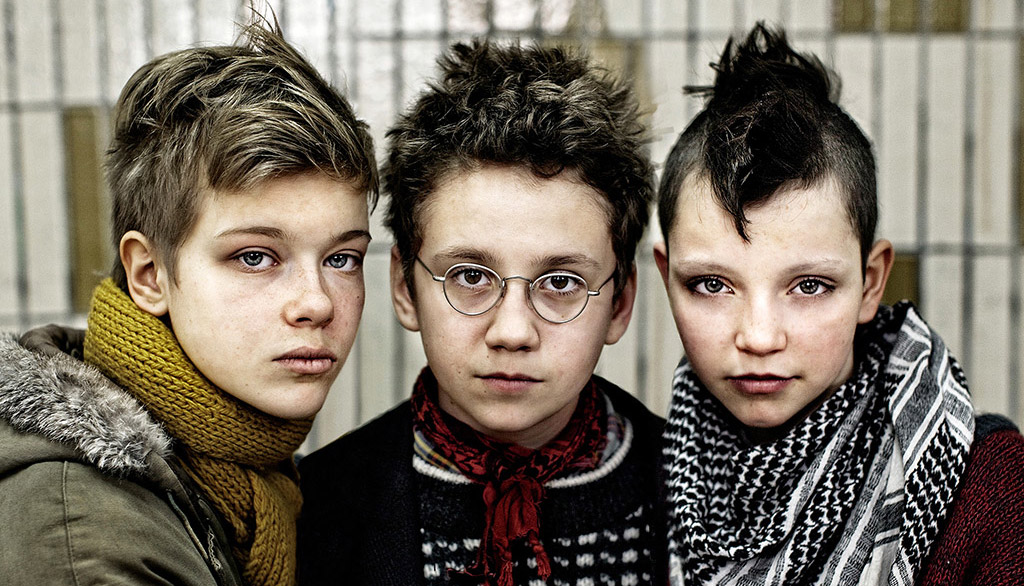 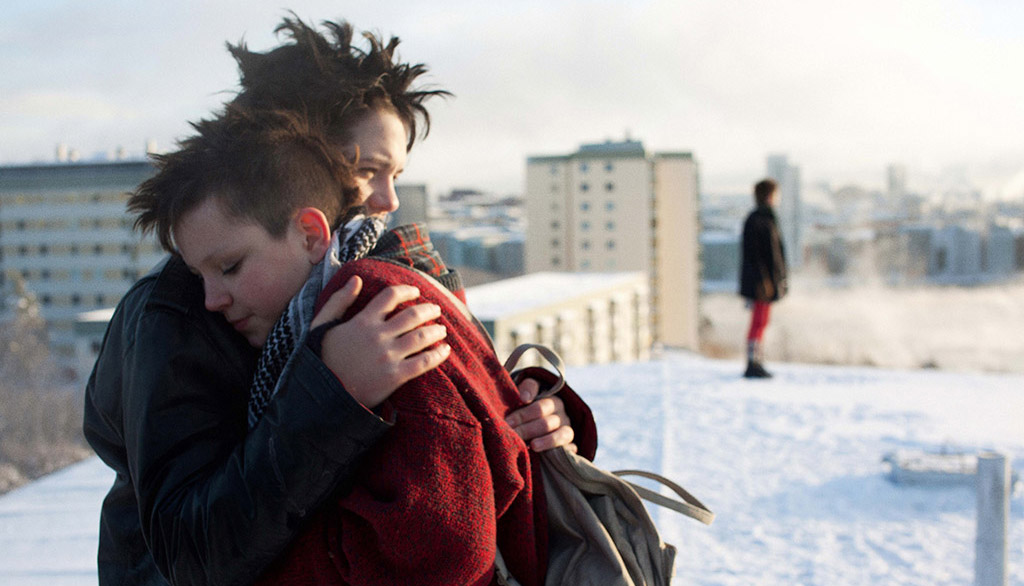 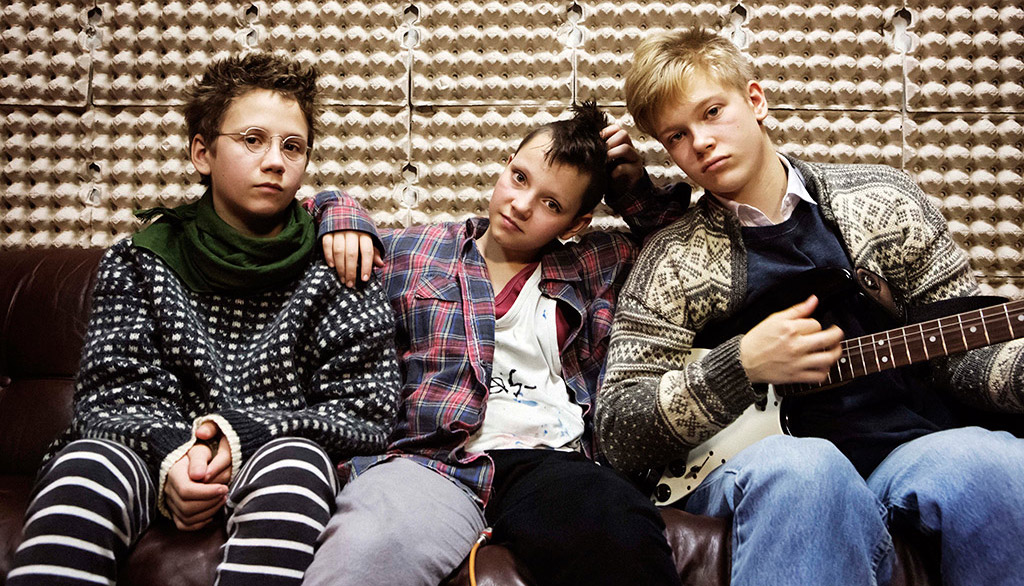 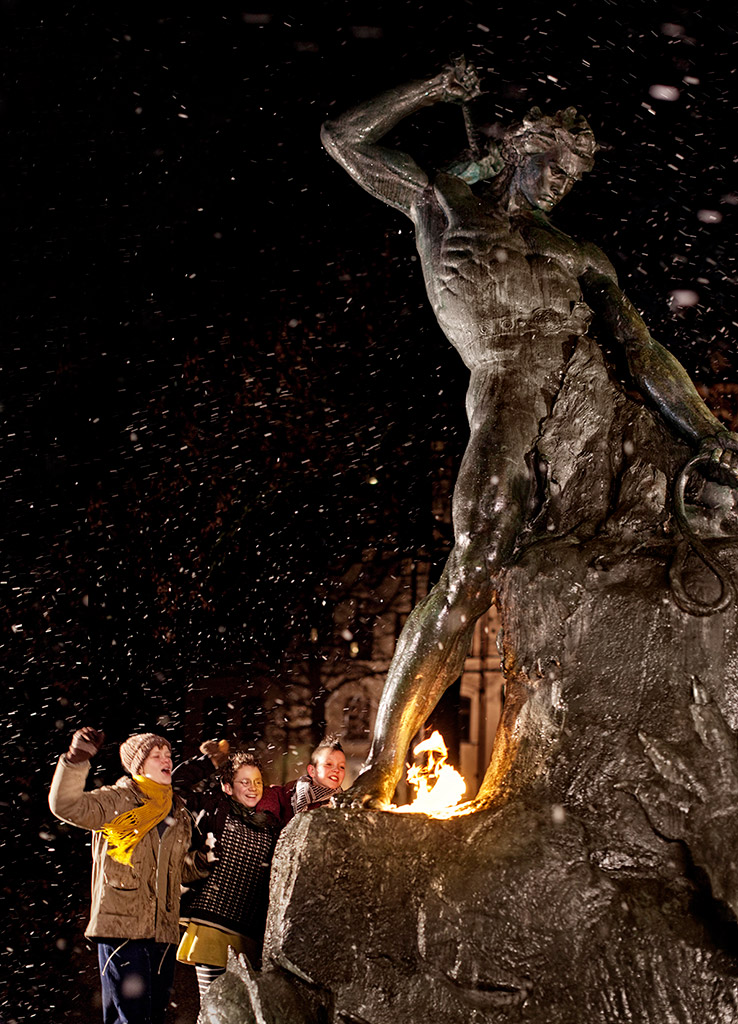 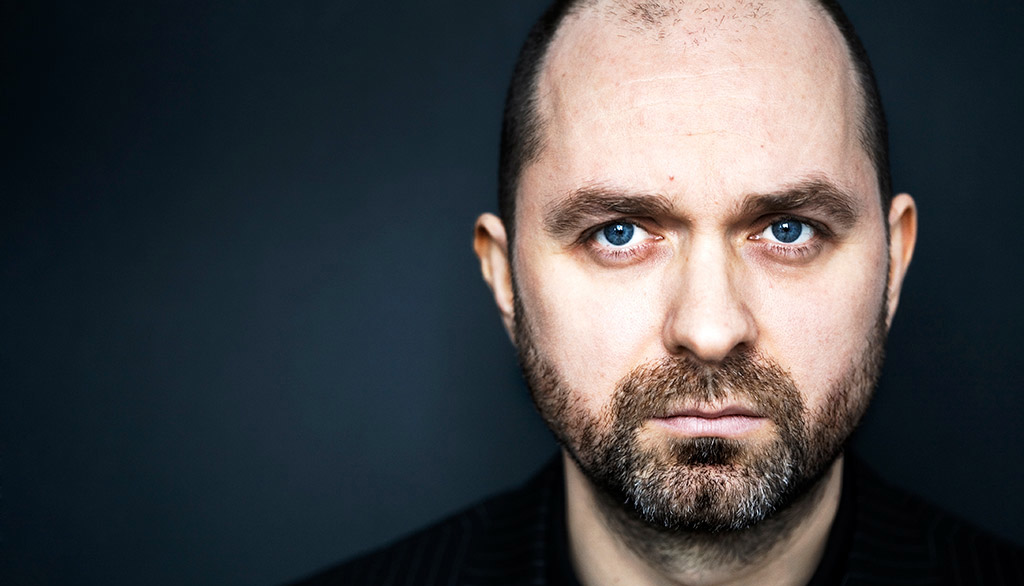 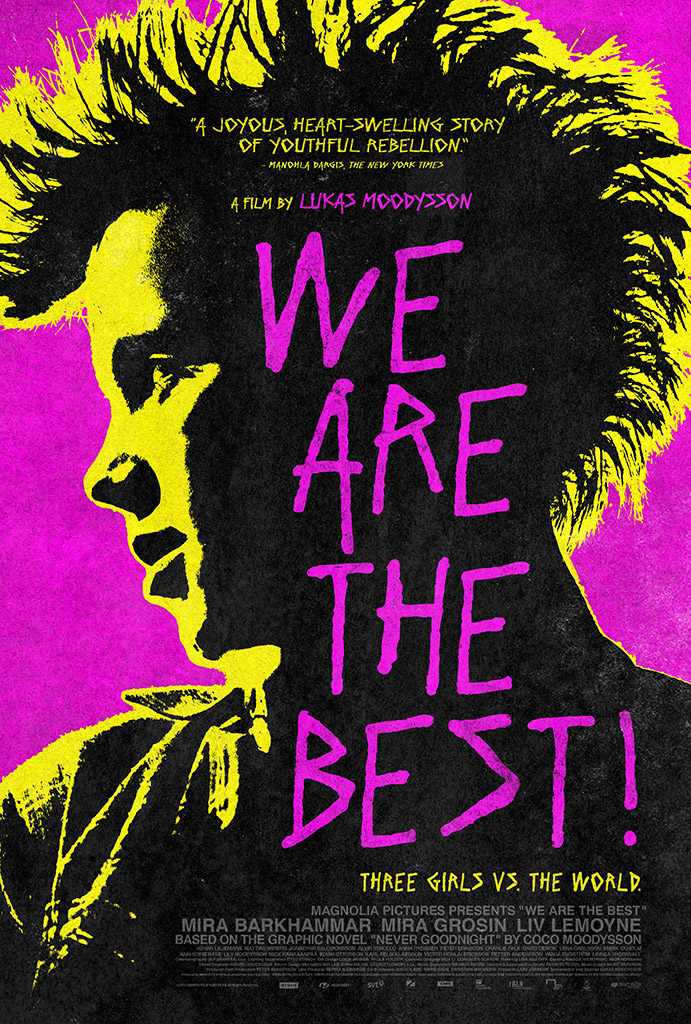 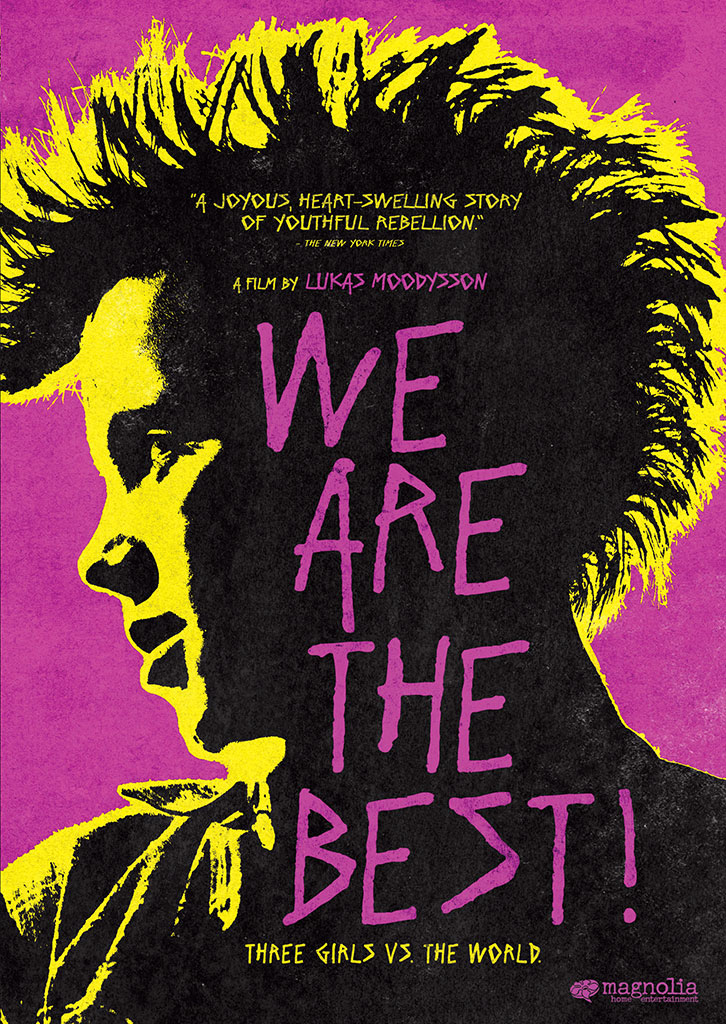